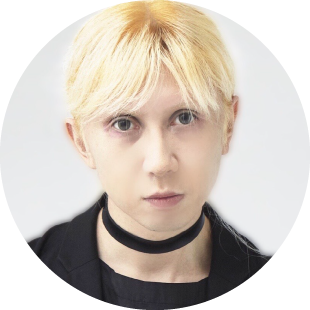 3/4 Japanese and 1/4 Russian. He started painting on his own in 2018.
KENDY has created a new artistic concept called “VISUAL ROCK PAINt” which coexists in the dichotomous worlds of East and West, digital and analog. Based on the cultural values of Japan, which have embraced and developed diversity, KENDY creates artworks that express the desire for the abolition of racial discrimination and world peace. At the same time, he is also is an artist working internationally, mainly in the United States, to realize well-being for Society.
In Japan, KENDY’s works are collected by famous celebrities such as Yuki Takahashi, Executive Vice President of Bears, Inc. who supervises the Japanese TV drama “The Way of the Househusband” starring popular actor Hiroshi Tamaki, and the TBS drama “The Full -Time Wife Escapist”” etc, and Mr. Koichi Nakagawa, former Associate Professor of Osaka University Graduate School and lecturer of BOND-BBT MBA (currently President of Easy Business Lab, Inc.), who won the Best Paper Award at Euro-Asia Management Studies Association 2016.

VISUAL ROCK PAINt, a new artistic concept, is a method of painting that visualizes anger and sadness being confronted and then overcome, and encourages the viewer’s psychological well-being. The aim is to depict the process of psychological change through the external effects of music and to play a role similar to that of healing through painting. Specifically, this painting technique is based on the correlation between rock music and self-harm. By using extreme rock music as a color scheme and scratch painting, we can visualize how the subject is wounded and then how they repair their wounds. The goal is to create a work of art that can improve the control of emotions by visualizing how the subject is both injured and how they are repaired. This artistic concept includes a lot of knowledge from his studies in business administration, religion, and psychology, which he majored in when he was a student. The visualization of the tertiary emotions that arise in the process of controlling the primary and secondary emotions are called VISUAL ROCK PAINt. In Buddhism, this can be seen as a modern form of Nirvana. The composition of KENDY’s paintings is all based on the golden ratio of Western art and incorporates the asymmetrical beauty of Zen art. In this way, KENDY has created his unique view of the world that harmonizes unity and independence.

KENDY is an artist who created a new artistic concept called “VISUAL ROCK PAINt.” While the mainstream of modern and contemporary art, especially in the West, is based on stylistic assertions, visual rock does not assert a specific style. Unlike Western art, which is logically divided into genres, Japanese art has a history of evolving since ancient times by embracing diversity. This is why it has developed into such a diverse art form. The basics of visual rock are influenced by completely different aspects of music, such as British new wave and American hard rock, while the fashion side is influenced by Japanese kabuki culture. In his opinion, the reason why visual rock has evolved in such a diverse way, incorporating various cultures, is largely due to the philosophy of Japanese Zen art. In other words, Zen art is the beauty of imperfection that lies beyond perfection. That is the beauty of Japan. KENDY’s style has been influenced by various sources, such as the Russian Kandinsky, who visualized music, the imperfections of Zen art, and the beauty of asymmetry. He believes that accepting each other’s culture is necessary for the future of international society, and that is why he has been conducting his art activities. It is an art form that originated in Japan and is distinct from the style assertions of modern art of today.

In the historical trend of abstract expression pioneered by the Russian artist Wassily Kandinsky (see below), there is the action painter Jackson Pollock. And the Japanese artist Kazuo Shiraga is also in this vein. The Japanese artist Kazuo Shiraga has also followed this trend, combining radical action painting techniques that directly link physical movement and painting with Buddhism, especially esoteric Buddhism, which places greater emphasis on the senses and body in enlightenment. KENDY’s “VISUAL ROCK PAINt” follows this trend of art history, fusing the mathematical elements of Russian abstract art, Rayonism, and the geometric elements of Scandinavian art into a unique style that has evolved to the present day. Russia, one of KENDY’s home countries, was the first country in the world to have a manned space flight by Yuri Gagarin in 1961, and the issue of identity, which KENDY has been dealing with since childhood, has greatly influenced his style. This is not only KENDY’s internal problem as a multiculturalist but also the social problem of 21st-century globalism, which can be called the space age. Environmental problems, energy problems, religious and racial conflicts, terrorism, financial and economic crises, and many other problems are still occurring on a global scale. In such a situation, to deal with various problems with a broader vision, it would be very important to consider the nature of the Universe and human beings to find a way of post-globalism, as human beings have forgotten their reverence for nature. This is how he concluded that it is very important to think about the nature of the Universe and human beings to deal with the problems of post-globalism, and he began to draw art to create questions that would raise these issues. Religious artifacts and astronomical materials have become important artistic legacies, helping to develop cosmological theories and renew our sense of the universe. Typical of this way of talking about globalism and multiculturalism in the context of contemporary art is to talk about postcolonial cultures as exoticism or to talk about historical facts in a political context. These are methods of art that have been used many times since the 1990s. That is why KENDY strongly hopes that his art, which is in the vein of minimalist Rayonism, will become a new question for the next generation to solve the problems of postmodernism.

His artistic concept is in the historical context of abstract art, which began with the Russian artist Wassily Kandinsky and led to Richter and Jackson Pollock. The Russian art of Rayonism is seen as “light” and Zen art is added to it to embody enlightened art. On the other hand, there is also an effort and role to preserve the unique Japanese art and culture of visual rock music as a cultural asset in the context of the world’s art. This is based on his experience as an aspiring visual rock musician. His painting style is also a modern interpretation of Andy Warhol’s silkscreen, mixing digital silkscreen with analog acrylic painting. It can be said that this is his new artistic method, which is typical of a Japanese-Russian quarter who wants to make many people living today aware of the social problem of “symbiosis” that people will face soon with the evolution of AI.

The fact that KENDY is self-taught in painting is also strongly related to his motto “VISUAL ROCK PAINt.” He does not have an academic background in art, except that he won awards for his art when he was a child. KENDY also used to be a visual rock musician. As a former visual rock musician, he has more knowledge of musical creation than painting. In this context, he referred to Japanese visual rock, which absorbed various kinds of music flexibly and constructed a unique worldview not found in Western rock, since Western rock has a clear separation of genres. He has succeeded in creating his new unique style by combining two completely different elements, “Japanese and Russian culture,” which would not normally be encountered. Music and painting are two different forms of expression. Some might say that, but the rapper, music producer, and art collector Swizz Beatz admits that music and art are very closely related in the world of expression. There is always music in the artist’s studio, and Wassily Kandinsky’s commercial success in visualizing music says it all. While visual rock itself is very difficult to penetrate due to the nature of the music market in Europe and the United States, this kind of sampling technique has been popular in the art world since the ’80s and 90’s as a form of simulationism. In this respect, KENDY’s style may have been relatively easy to accept in commercial gallery exhibitions in Europe and The United States from an earlier time, even though his career was still in its early stages.

Have you ever heard of the SDGs, the goals proposed by the United Nations to be achieved by 2030? KENDY aims to achieve peace and equality among people as stated in paragraphs 10 and 16 of this goal by creating paintings that raise issues and appeal to people. The background of this artistic concept is based on KENDY’s own tragic experience of bipolar disorder, bullying due to his racial problems being 3/4 Japanese and 1/4 Russian, truancy, and finally dropping out of high school. According to psychology, interpersonal relationships worsen if the secondary emotions are not handled well by anger management and therapy. Repeatedly experiencing tertiary emotions is also said to worsen symptoms of depression and anxiety disorders. In today’s society where we are supposed to fight against stress, we must first prevent the deterioration of interpersonal relationships by healing and controlling our emotions.

What is humanity? What is art? And what is culture?

KENDY creates paintings that appeal to the atomic emotions that people have. In other words, he aims to create paintings that will help many people free their minds to fully exercise their power.

In closing, in 2020, when the global pandemic of the Coronavirus (Covid-19) happened, mixed with the uncertainty of the future of the 21st Century, known as the Post-Corona and with-Corona era, it will probably go down as a bad part of history. “Is that what you want?” KENDY does not think so! He believes that the power of people will always open up a brighter future. Based on KENDY’s artistic philosophy of “No border in the world” from his early days, he will do his best to raise the issue of the state of people’s minds for a better future. He hopes to work with as many of you to create the future and renew history. In the present moment and the future, he is constantly working on his paintings, hoping that they will become an artistic concept that will bring light to everyone’s life.

-References (in no particular order) –